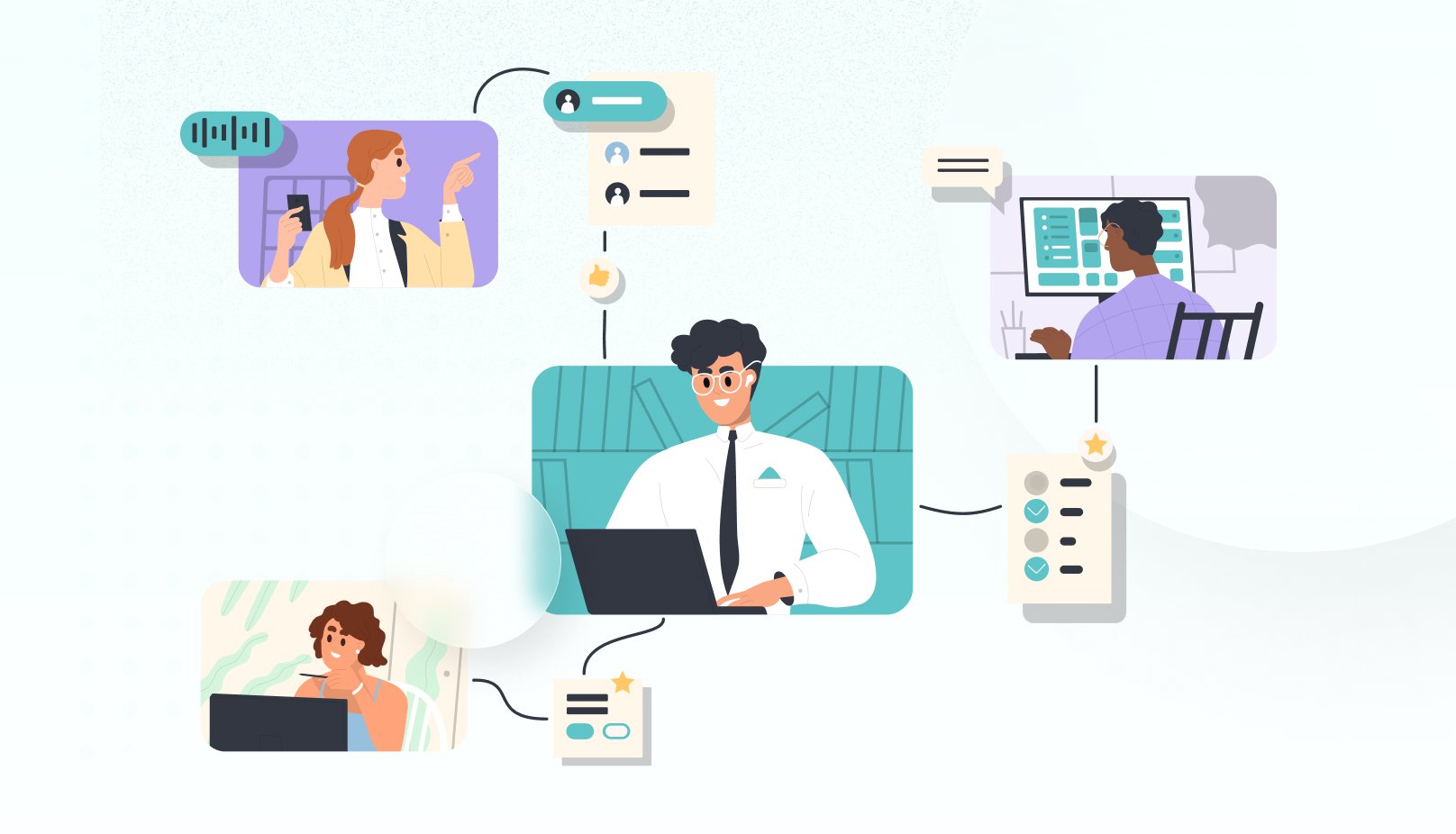 Open communication happens in a team when its members are empowered to share their thoughts without any fear of repercussions. It’s not a one-off phenomenon. It’s a cultural trait that teams cultivate with practice.

Open communication helps build trust in the organization and sows the seeds of transforming employees into co-entrepreneurs.

In this post, we’ll discuss why open communication is important for teams. Before we dig in, let’s look at some of its examples and dispel its common myths

What are some examples of open communication?

Open communication doesn’t mean having more meetings or team-bonding activities. As we discussed, it’s creating a culture where people can state their opinion without any fear. But that doesn’t happen naturally. It requires am obsessive commitment from the leadership team. Here are some specific examples of open communication:

It’s one thing to say that everyone’s opinion matters but a completely different thing to create policies to encourage that. If you have an open-door policy for strategic meetings, the team feels that their opinion is truly valued. For example, at Taskworld anyone from the company can join the weekly sprints and give their input. Of course, this doesn’t mean that every decision is democratized or every meeting is public. But it gives everyone a chance to voice their opinions on matters that concern the entire company.

Many companies want their team to not just be employees but co-entrepreneurs. If you aspire to create a sense of ownership in your team, you need to treat them like owners. Usually, it’s only the senior management that has information around the company’s finances, marketing budget, P&L, operations cost, etc. This creates a forced and needless divide among those who are privy to such information and those who aren’t. Sharing such information is an important sign of open communication in any team.

The ability to give real-time and frequent feedback across all directions is a positive sign for open communication at work. A good rule of thumb is to ask yourself if you can give feedback to the CEO of your company. If not, there is work to be done to make communication more open. Real-time feedback is another sign of open teams. That’s why many organizations are replacing archaic yearly reviews with a culture of high velocity, evidence-based feedback.

Teams that embrace open communication encourage their members to raise problems rather than brush them under the carpet. This also helps in boosting accountability as people are more likely to own their mistakes if they aren’t penalized for raising them.

Many teams resort to anonymous feedback to surface important issues that remain hidden. The intention and rationale are correct. But it underlines another bigger problem - Why can’t people say what they want without being anonymous? What are they afraid of? Fixing those reasons is critical for fostering a culture of open communication.

That’s why I am not a fan of anonymous feedback. Although it can be useful if an organization doesn’t have an open culture wants to get honest feedback. The goal should be to cultivate a culture that allows you to move away from it.

Why is open communication important?

When people feel that their opinions alone wouldn’t land them in hot water, they experience higher trust and camaraderie with their teammates. Trust is important for open communication. And open communication leads to higher trust. It’s an interesting cycle and focusing on either of them leads to stronger reinforcement of the other.

When employees feel empowered to share candid feedback with anyone, they experience a strong sense of belonging and ownership towards the company. Sharing strategic insights about the business with the team further emboldens their resolve to take ownership of their work.

A big chunk of stress at work results from concerns around communication. Did my boss appreciate me speaking up? Did my teammates understand what I said? Should I share this information with another department? A culture of open communication gives a sense of security to the team and reduces stress.

Different cultures have their own communication styles. For example, the difference in western and Asian approaches to collaboration is no secret. The open communication movement has influenced all cultures to strive for a similar environment. It isn’t uncommon for traditionally hierarchical work environments like India or Japan to now embrace the ideals of open communication. This makes it easier to address differences in multicultural teams.

How do you encourage open communication?

Open communication can only flourish if the management is obsessed with it. Adopting the following four behaviors will help:

Keep an eye on the participation of your team in meetings and public forums. Do they question your decisions? Do they speak unless asked? Are they focusing more on preserving harmony rather than challenging opinions? You will understand how comfortable your team is in opening up.

To encourage participation and normalize differences in opinion, ask pointed questions to your team during discussions. Despite cultural differences, people are more likely to share their thoughts when asked specifically. For example, “Do you see any weaknesses in this plan from an engineering perspective?”

Being a keen listener isn’t enough. If the team believes that you listen to them only to make them feel important, they’ll get discouraged. To keep them energizes, use their ideas that resonate with you. More importantly, communicate the impact back to the team. Even if you aren’t using your team’s ideas, tell them why rather than just ignoring their suggestions.

If you implement your team’s idea and see promising results, then acknowledge their contribution. This will motivate them and inspire others to contribute. Teams adopt open communication when they feel that they won’t be ridiculed for their bad ideas but praised for the good ones.

How do you maintain open communication?

The culture of open communication like all cultures needs strong reinforcement.  Apart from a relentless focus on behaviors that foster open communication, make it part of the hiring process. Ensure that new hires would be the right fit for your team.

Involve your team in the process. You might feel that your team enjoys open communication, but others might feel differently. Ask them for feedback. Until every single person in the team feels empowered to communicate freely, the job is only half done.